The Rise of Quantum Computers

The Rise of Quantum Computers 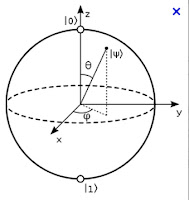 In William E. Halal’s Book  Technology’s Promise, various predictions about future technologies are examined as part of the TechCast Project.  The TechCast Project is made-up of various experts who express their views of what is likely to happen in regards to technology.  In the area of Information Technology the panel of experts predict that there is a 65% probability that Quantum Computers will be available by 2020. 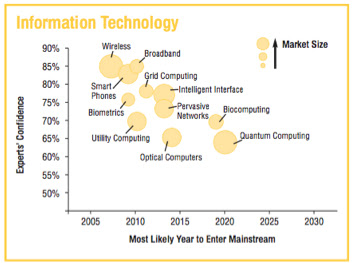 What are Quantum Computers?  These are computers that exploit the advantages of Quantum Physics. The basic unit of quantum computing is a“qubit”—an electron spinning either clockwise or counterclockwise, representing a 0 or a 1.

Because electrons can coexist in two places simultaneously, a single electron can carry two qubits, two electrons can produce four qubits, three electron eight, and 20 electrons could perform a million computations. This exponential growth raises the hope of infinite processing power according to Halal.

This will allow scientist to complete task in seconds instead of years. Many individuals feel this will open-up the next round of major advancements in the field of computer science.

A Short Video Explaining What Quantum Computers Are

Posted by Digital Transformation - The Business of Software at 12:08 PM