The Forest of Confusion - Tree of Meaning

Let’s say you are examining a future technology like a quantum network router that would give you the ability to move data between two quantum systems without a physical connection.  To create a set of possibilities, one could use the Stages of Inquiry.   The well-defined steps and graphical representation walks one through the process from the initial problem to understanding the final impact of your choice.

The feature or method that I found most interesting is Tree of Meaning that may emerge once one goes through the Stages of Inquiry.  Dr. Alexander N. Christakis suggested using a Tree of Meaning using the 6 Dialogue Laws to aid in the resolution of the constraints and difficulties described as Spreadthink, while also promoting the pursuit of meaning and wisdom in dialogue (Schreibman and Christakis).

The 6 Laws of Dialogue are:

1. Appreciation of the diversity of perspectives of observers is essential to embrace the many dimensions of a complex situation.
2. Disciplined dialogue is required so that observers are not subjected to information overloaded.
3. The relative importance of an observer's ideas can be understood only when they are compared with others in the group.
4. Meaning and wisdom of an observer's ideas are produced in a dialogue only when they begin to understand the relationships such as similarity, priority, influence, etc., of different people's ideas.
5. Every person matters, so it is necessary to protect the autonomy and authenticity of each observer in drawing distinctions.
6. Evolutionary learning occurs in a dialogue as the observers learn how their ideas relate to one another.

SDP for Support Planning and Innovation

Using the 6 Laws of Dialog and the Stages of Inquiry one could step through an orderly process to examine the various factors that could be impacted by going down a certain path.  Let’s assume that the conclusion is that if you believe in the notion of quantum computing then you will likely need quantum routers to connect entities together or basically have a standalone computer – which does little good in a global community. This would likely spark intense debates over the role of computing; networking and innovation.   Which in turn will likely have major political and socioeconomical ramifications. 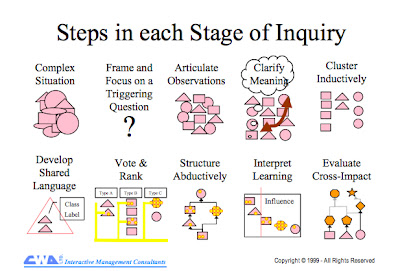 During this process, one will likely encounter Spreadthink and Groupthink before rational thought prevails. Questions will be asked like - is this going to be a breakthrough that benefits everyone or simply the playground of the privileged few. Hence this approach gives you another way to think about the possibilities and make a larger part of the community an active participant in the conversation to discuss the alternatives.

Posted by Digital Transformation - The Business of Software at 12:17 PM